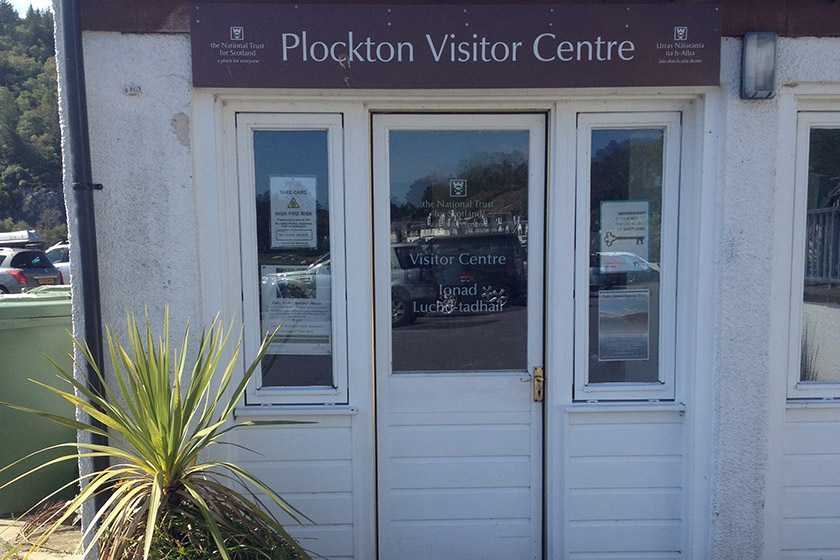 Due to clearances in the wider area, by mid 1840s Plockton’s population had risen to 547 with herring fishing underpinning the local economy. Plockton fared better than other villages in the potato famine, but there was still hardship. The herring remained its livelihood with crofting providing additional support after 1888.

The Herring
Herring fishing was the key to local prosperity from 1850 onwards. Local schooners from Plockton traded directly in the Clyde and other areas, where better prices for their catch allowed for the purchase of essential curing salt. Herring were packed in barrels, preserved with salt or brine. In 1900 herring catches worth £7000 were recorded.

With the railway terminus extending through Plockton to Kyle of Lochalsh by 1898, the herring could easily be transported to a wider market place. This route to market was also key to the success of the white fish trade when the herring catch gradually declined.

The Railway
The Dingwall and Skye railway started in 1870, and ran from Dingwall and originally terminated at Strome Ferry, where fish was landed and some processed for the London market.

By 1898 the railway was extended to Kyle of Lochalsh. Although this entailed a major feat of engineering, it was of great benefit to the local area. The fishing industry prospered, as herring boats were saved the long traverse of Loch Carron and white fish could now be marketed fresh. Kyle of Lochalsh grew as a ferry port and rail terminus, sowing the seed of today’s tourist industry.

Take a trip on the train to Kyle, where on the platform you can see the museum and shop, and become a member of the ‘Friends of the Kyle line’.

Plockton – the recent past
The early 1900s saw the local economy decline once more with many Plockton men away in World War I. Population numbers fell. Public works and some house building provided a little support and as part of this, the Plockton village hall, a major asset, was built in 1934.

The aftermath of Work War II brought great changes to the Highlands. Electricity arrived in the late 1940s. From the mid 1960s local population increased, and with better roads and communications, the growth in tourism became the key support for the community.

Education in Plockton
The first purpose built school was on Innes Street, and was built by Sir Alexander Matheson in 1865. Initially it catered for primary education for the children of Plockton, and Higher Grade Education for the whole area.

As time progressed various rented rooms in village houses were used for primary education. The main school building in Innes Street, now the present primary school, was for some time given over completely to Higher Grade students.

The 1960s saw the completion of the large Plockton High School complex facing the station. This is also the home of the world renowned ‘National Centre for Excellence in Traditional Music’.

Plockton sits on a sheltered bay with stunning views overlooking Loch Carron, in the Highlands of Scotland.

Signup to our Newsletter